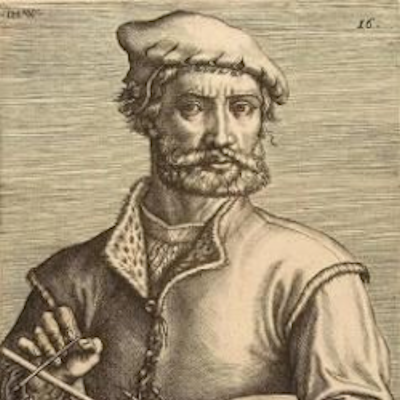 Willem van Aelst was the son of the Delft notary Jan van Aelst. At an early age he was apprenticed to his uncle and still life painter Evert van Aelst. He joined the local guild as master in 1643. In 1645 the young artist traveled to France and in 1649 he continued his journey to Italy where he joined a circle of Dutch artists who were working in there.

Van Aelst was described by this group as an exuberant figure who made many jokes. Despite his youthful excesses, the very elegant style of van Aelst drew the attention of Ferdinand II de 'Medici, Grand Duke of Tuscany, and other nobles. Van Aelst always proudly wore a gold chain and a medal that the Grand Duke had given him, and often signed himself with an Italian panache 'Guillelmo van Aelst'.

In 1656 van Aelst returned to the Netherlands and settled in Amsterdam where he continued a spectacularly successful career, because of his success he could afford to live on the Prinsengracht, one of the most beautiful canals in the city. According to Houbraken, he was less fortunate in love: shortly after his return from Italy, van Aelst fell in love with the flower painter Maria van Oosterwyck, a deeply religious woman.

She stopped him by saying that if he worked a fixed number of hours in his studio every day for a year, she would cherish his amorous proposition.

Maria's studio looked out over van Aelst's, so she could see him at work; every time he was away from his easel, she drew a pinstripe on her window frame. By the end of the year, the list was so covered in chalk that Van Aelst gave up his mission and eventually married a cheerful maid.

Van Aelst's exact date of death is unknown, but he must have died in 1683 or shortly after, since his last work dates from that year. As far as we know, Van Aelst only painted still lifes, but in a wide variety, from small pieces of fruit to elaborate bouquets and impressive compositions with dead game.

Rachel Ruysch worked in his studio from 1679 until his death. In the second half of the seventeenth and early eighteenth centuries he had a great influence on still life paintings in his home country and abroad; his followers included Ernst Stuven, Jacob Denys, Nicolaes Lachtropius and Hendrik de Fromantiou.

Willem van Aelst's earliest work dates from 1643. It strongly reflects the style of his uncle and depicts a vase of flowers with some fruit at the base. During his career, many floral arrangements would flow, gradually evolving from the simple, small bourgeois Dutch bouquets of tulips and roses to the elegance of an aristocratic and international allure. Tulips and roses continued to play a leading role in his works.