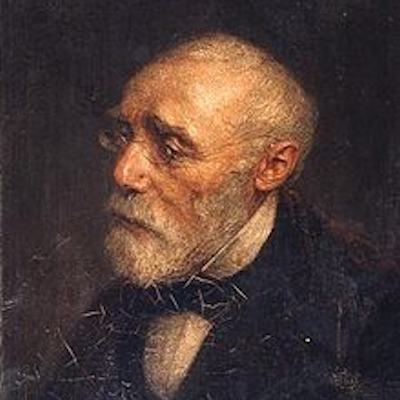 Jozef Israëls was born in Groningen on January 27, 1824 and was of Jewish descent. His father, Hartog Abraham Israëls, wanted him to become a businessman. Only after a determined struggle, he could start an artistic career. He initially studied from 1835 to 1842 at the Minerva Academy in his hometown Groningen, in the Netherlands.

From the age of eleven, Jozef was taught by landscape painter Jacob Bruggink, who was connected to the Minerva Academy in Groningen. His second teacher was J.J.G. van Wicheren and in 1838 he received painting lessons from Cornelis Bernardus Buijs. He then continued his studies in Amsterdam and studied at the Royal Academy of Fine Arts, which later became the National Academy of Fine Arts. Here he took drawing lessons from Jan Kruseman.

Jozef lived in Paris from September 1845 until May 1847. Here he worked in the studio of the history painter Picot and took classes at the Ecole des Beaux-Arts with James Pradier, Horace Vernet and Paul Delaroche. Jozef returned to Amsterdam in September 1845, where he resumed his studies at the Academy.

Jozef stayed in Amsterdam until 1870. He moved to The Hague and became a leading member of the Hague School of Landscape Painters. He married Aleida Schaap and the couple had two children, a daughter Mathilde Anna Israëls and a son, Isaac Lazarus Israëls, born on February 3, 1865 in Amsterdam. Isaac also became an artist.

Jozef initially tried to establish himself as a painter of romantic portraits and conventional historical images but was not very successful. In 1855 he left Amsterdam because of his poor health and settled in the fishing village of Zandvoort, near Haarlem. This change of scenery revolutionized his art: he turned to realistic and compassionate images of Dutch farmers.

In 1871 he moved to The Hague and often worked in nearby Scheveningen. His son Isaac (1865–1934), also a painter, chose an impressionistic style of painting and had some influence on his father's later work. In addition to oils, Jozef worked in watercolors and was an etcher of the first rank.