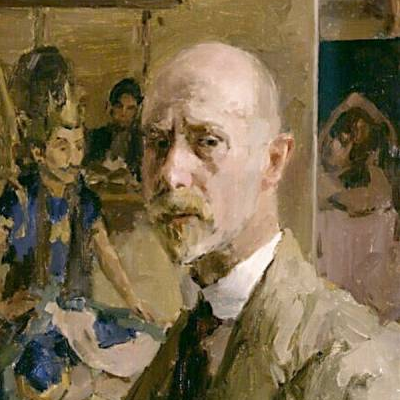 Isaac Lazarus Israëls was born in Amsterdam on February 3, 1865. He was one of the most important Dutch painters from the group of Amsterdam Impressionists. In addition to his painting work, he was a draftsman and watercolorist and made pastels, etchings and lithographs. Trained in the studio of his father Jozef Israëls, one of the masters from The Hague School, he barely attended an academy in The Hague for a few years, from 1880 to 1882. He also remained self-taught, alongside his father. In 1881 he made his debut with The Rehearsal of the Signal at the Exhibition of Living Masters in The Hague.

The painting was bought by Hendrik Willem Mesdag even before it was finished. In 1882 he received an honorable mention for Military Funeral at the Salon des Artistes Français in Paris.

In 1886 he studied briefly at the Rijksacademie Amsterdam, where he was expelled because he was now an accomplished student. He stayed in Amsterdam until 1908.

There he became acquainted with the mundane city life and met George Breitner and Willem de Zwart, who became his painting friends. He became the painter of the turbulent nightlife with a free, graceful impressionistic touch. In 1904 he started to go outside with the easel to paint and use the direct light on canvas in beach and dune scenes. He often worked with the German painter Max Liebermann in Scheveningen.


Israëls lived in Paris from 1905 to 1913, where he was impressed by Edgar Degas and the work of Henri de Toulouse-Lautrec. He had his studio there on Boulevard de Clichy. He painted the specific Parisian motifs there: the public in the parks, the cafes, cabarets and bistros, in addition to the circus and fairground acrobats. Here, too, he depicted the studio life with the French couturière Jeanne Paquin. However, he only took part in one exhibition in 1909.

He stayed in London from 1913 to 1915. Here it was the riders on Rotten Row and the young dancers in the ballet school that interested him. In 1921 Israëls traveled to the Dutch East Indies. He stayed mainly on Java, in Batavia, Buitenzorg, Yogjakarta and Solo where he spent some time at the court of the Mangkoenegara, introduced by the dancer Raden Mas Yojana, whom he had met in the Netherlands. He also visited Bali together with the Veth family. In 1923 he returned to The Hague.

He went to live permanently at Koninginnegracht 2 in The Hague, in the house of his parents. In the coach house of no. 2, Isaac and his father each had their own workshop. The father of Israëls died in 1911. In 1928 Isaac won a gold medal in the painting tournament of the Olympic Games in the category painting with the work Rider in red skirt , also entitled Rider with the red coat, The red rider or The red rider horseman.