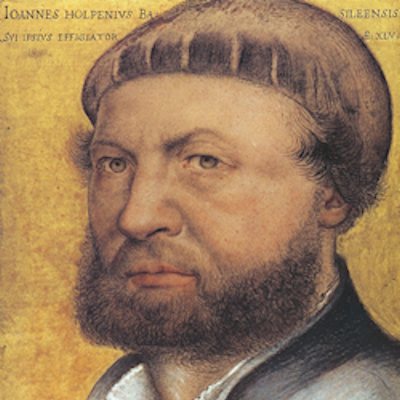 Hans Holbein the Younger was a German painter and graphic artist who worked in the Renaissance style and is still considered one of the greatest portraitists of the 16th century. Holbein learned the art of painting from his father. He moved with his brother Ambrosius Holbein to Basel where he joined the painters' guild in 1519.

He also produced religious art, satire and reformation propaganda and made a significant contribution to the history of book design. In 1519, Holbein married Elsbeth Binzenstock, with whom he had four children, two daughters - Katharina and Küngold - and two sons - Philip and Jakob.

The assignments of the Roman Catholic Church dropped sharply during the Reformation, so Holbein had the greatest difficulty keeping his head above water as an artist in Basel. On Erasmus's recommendation, Holbein made a trip to London where he met Thomas More.

Around 1530 he painted a series of portraits of merchants in London and the surrounding area. This generated more assignments. Thomas More introduced Holbein to the English court.

He went back to Basel for a short period. As soon as he returned to London, in 1536, he was appointed court painter to Henry VIII. He painted portraits of the king and queen and designed state robes for them.


Much of Holbein's early work, which mainly consisted of religious subjects, was lost during the Swiss iconoclasm of February 1529. Lucas Horenbout taught Holbein the art of painting miniatures around 1535. Before painting a portrait, Holbein always made a very detailed design in the form of a drawing with pencil, ink and colored chalk. In those drawings he then wrote directions for later, such as the type of fabric of the clothing and the colours he intended to use. He also used real gold and silver in his paintings. Holbein died of plague in 1543.