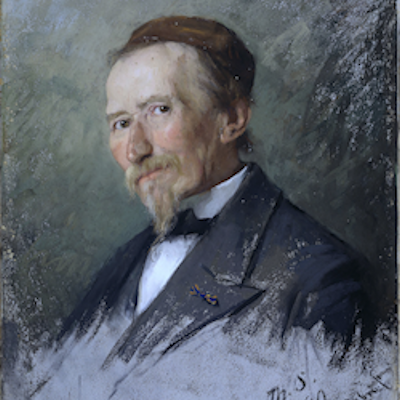 Gabriel was born in Amsterdam on July 5, 1828, he was a painter, draftsman, watercolorist and etcher who belonged to the Hague School.His father Paul Joseph Gabriel was a sculptor and painter. From 1840 to 1843, he trained at the National Academy of Fine Arts in Amsterdam with Louis Zocher as his mentor.

In 1845 he left for Cleves in Germany to the drawing academy of Barend Cornelis Koekkoek. Later he returned to the Netherlands and studied with Cornelis Lieste in Haarlem.

Here he met Anton Mauve, with whom he would collaborate a lot. In 1853 Gabriel moved to Oosterbeek, where landscape painter Johannes Warnardus Bilders had surrounded himself with many young painters. The members of this group would later become central figures in the Hague School. Eventually Gabriel moved back to Amsterdam, but he was not happy there and left for Brussels.

In Brussels he befriended Willem Roelofs and took advantage of Roelof's social position in the Brussels art world. Supported by Roelofs, Gabriel developed into a better landscape painter with a clear palette.

Gabriel's paintings are distinguished from the 'shades of gray' for which the Hague School was known because of his use of clear colors. The more he looked at the Dutch landscape, the more color he saw in it.


From 1862 Gabriel made regular study trips to the Netherlands: first to Oosterbeek and Arnhem, in 1866 to Veenendaal, in the 1970s to Abcoude and Vreeland. Around 1880 he spent the summers in Kortenhoef on Kampereiland and in Giethoorn. He visited the places in Overijssel with Willem Bastiaan Tholen.

Gabriel returned to the Netherlands in 1864 and settled in Scheveningen where he bought a house next to his student Geesje Mesdag-van Calcar. Together they painted still lifes with flowers. In 1886 Gabriel began to receive recognition in the Netherland. He stayed at the Mesdags in Drente, where he made studies of the fields, barns and farms.

Gabriel died on August 23, 1903 at his home in Scheveningen.