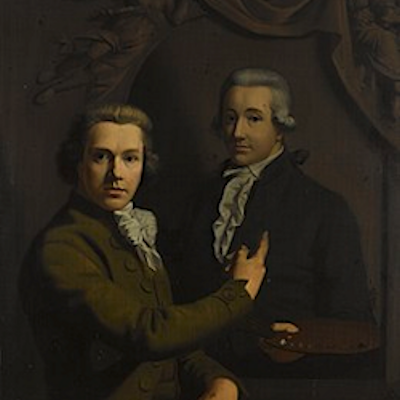 Willem Bartel van der Kooi was born in the Frisian village Augustinusga on May 13, 1768. He grew up with his younger brother in a family of modest wealth and with some prestige. He early on showed interest in drawing and sculpting and was therefore apprenticed to local dyers and wallpaper painters since he was twelve years old.

From 1783, the promising country boy was taught for years by Johannes Verrier, an amateur painter from Leeuwarden who taught him to draw from plasters and to paint with oil paint.

Van der Kooi started as a painter at a time when Friesland could not provide many inspiring colleagues or role models, and - together with his art friend Dirk Jacobs Ploegsma, who died in 1791 - he developed his painting talent practically without guidance.

Early in his work, you could recognize the influences of the then dominant French neoclassicism. Of the many portraits he made, some were also drawn in black chalk. Political and administrative activities would get in the way of his work as a painter. For example, on June 23, 1795, he was elected representative of the people of Friesland.

A year later, he was appointed secretary and receiver of the estate of Achtkarspelen, the township of which his residence Augustinusga part of.


Important for Van der Kooi's development as a portrait painter was a trip to Düsseldorf in 1804. This fulfilled a long-cherished wish for him. In April of that year, he married 23-year-old Jetske Hayes, the daughter of a wealthy farmer from Bergum. Three sons were born from this marriage.

Shortly after the youngest was born, his wife died in childbirth; the child died two weeks later. Van der Kooi has never remarried. In an attempt to increase his reputation as a painter, Van der Kooi participated in 1808, in a competition by King Louis Napoleon in for the best genre piece. He competition was held for the occasion of the opening of the first national art exhibition in Amsterdam. Kooi won the prize of 2000 guilders with the painting: The letter offered (1808).

Thanks to this award, Van der Kooi received a number of portrait commissions from urban Amsterdam and government officials. He was now able to make a living out of his art. In 1813 Van der Kooi exchanged the former university city for Leeuwarden, where he would live until his death in 1836.