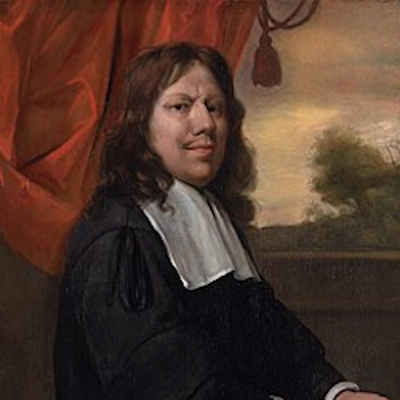 Jan Havicksz. Steen was the son of Havick Steen, a grain merchant and a brewer, married to Elisabeth Capiteyn. They were married in 1625 and Jan was born in Leiden in 1626.

Jan was their oldest child and was named after his paternal grandfather as usual. Only the names of one brother and six sisters have remained known. The names of the other brothers and sisters are unknown, because the Roman Catholic baptismal registers from that period were lost in Leiden. For that reason, Jan Steen's birthday is also unknown, as his parents died young.

Just like Rembrandt van Rijn, Steen attended the Latin school in Leiden. In 1646 he enrolled at the University of Leiden, he did not have serious career plans, probably his accession had more to do with the privileges, such as exemption from militia service and excise duties for wine and beer. He was enrolled as a student of literature but did not finish that study.

There are no documents showing from whom Steen learned the art of painting. According to the biographer Arnold Houbraken, he is said to have been taught by the landscape painter Jan van Goyen, whose daughter he married in 1649. Biographer Jacob Campo Weyerman states that he was apprenticed to Nicolaus Knüpfer, a German painter of historical and figurative scenes.


After that they think he would have been taught by Adriaen van Ostade, a painter of farm life, who lived in Haarlem. Both biographers are said to have received their information from Carel de Moor, a painter and friend of Jan Steen. He moved to Delft in 1654. He rented brewery 'de Slang', also known as 'de Roskam', on 1 November that year. The tavern didn't flourish and he got into debt.

He had his most productive period from 1656/1657 to 1660 in Warmond and then from 1660 to 1670 in Haarlem. In 1669 he was better off financially, but he was less fortunate in the private sphere. His wife died in the spring. His mother died later in that same year and his father the next year.

Steen moved back to Leiden to his childhood home, where he would live for the rest of his life. He died in early 1679 and was buried on February 3 that year in the family grave in the Pieterskerk in Leiden. His daughter Catherina married the sea painter Jan Porcellis. Two of his sons also became painters.

Order a reproduction on canvas or ceramic tile tableau by Jan Havicksz. Steen