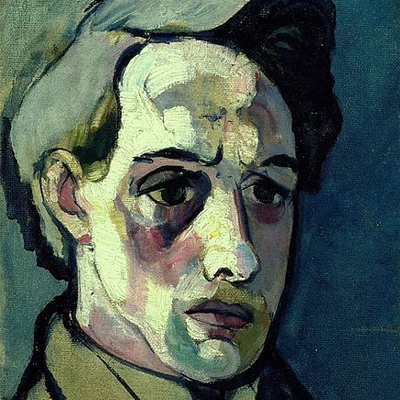 Theo van Doesburg was a Dutch artist, who practiced painting, writing, poetry and architecture. He is best known as the founder and leader of De Stijl.

Theo van Doesburg was born Christian Emil Marie Küpper on 30 August 1883, in Utrecht, the Netherlands, as the son of the photographer Wilhelm Küpper (nl) and Henrietta Catherina Margadant. After a short training in acting and singing he decided to become a painter. He always regarded his stepfather, Theodorus Doesburg, to be his natural father, so that his first works are signed with Theo Doesburg, to which he later added the insertion "van".

His first exhibition was in 1908. From 1912 onwards, he supported his works by writing for magazines. He considered himself to be a modern painter, at that time, although his early work is in line with the Amsterdam Impressionists and is influenced by Vincent van Gogh, both in style and subject matter. This suddenly changed in 1913 after reading Wassily Kandinsky's Rückblicke, in which he looks back at his life as a painter from 1903–1913. It made him realize there was a higher, more spiritual level in painting that originates from the mind rather than from everyday life, and that abstraction is the only logical outcome of this. It was already in 1912 that Van Doesburg was criticizing Futurism in an art article in Eenheid no. 127, on 9 November 1912, because "The mimetic expression of velocity (whatever its form may be: the aeroplane, the automobile, and so on) is diametrically opposed to the character of painting, the supreme origin of which is to be found in inner life". On 6 November 1915, he wrote in the same journal: "Mondrian realizes the importance of line. The line has almost become a work of art in itself; one can not play with it when the representation of objects perceived was all-important. The white canvas is almost solemn. Each superfluous line, each wrongly placed line, any color placed without veneration or care, can spoil everything—that is, the spiritual".

Van Doesburg had other activities apart from painting and promoting De Stijl: he made efforts in architecture, designing houses for artists, together with Georges Vantongerloo and Sophie Taeuber-Arp he designed the decoration for the Café Aubette in Strasbourg. Together with El Lissitzky and Kurt Schwitters, Van Doesburg pioneered the efforts to an International of Arts in two congresses held in Düsseldorf and Weimar, in 1922. A geometrically constructed alphabet Van Doesburg designed in 1919 has been revived in digital form as Architype Van Doesburg. This typeface anticipates similar later experimentation by Kurt Schwitters in his typeface Architype Schwitters. In the mid 1920s, Van Doesburg worked together with Schwitters and the artist Kate Steinitz to produce a series of children's fairy-tale books that featured unusual typography, including Hahnepeter (Peter the Rooster, 1924), Die Märchen vom Paradies (The Fairy Tales of Paradise, 1924–25), and Die Scheuche (The Scarecrow, 1925).

Van Doesburg also kept a link with DADA, publishing the magazine Mécano under the heteronym of I. K. Bonset (possibly an anagram of "Ik ben zot", Dutch for "I am foolish"). He also published Dada poetry under the same name in De Stijl. Under a second pseudonym, Aldo Camini, he published anti-philosophical prose, inspired by the Italian representative of Metaphysical art, Carlo Carrà. In these works of literature, he heavily opposed individualism (and thus against the movement of the Tachtigers, realism, and psychological thinking). He sought for a collective experience of reality. His conception of intensity had much in common with Paul van Ostaijen's conception of dynamiek. He wanted to strip words of their former meaning, and give them a new meaning and power of expression. By doing this, he tried to evoke a new reality, instead of describing it.