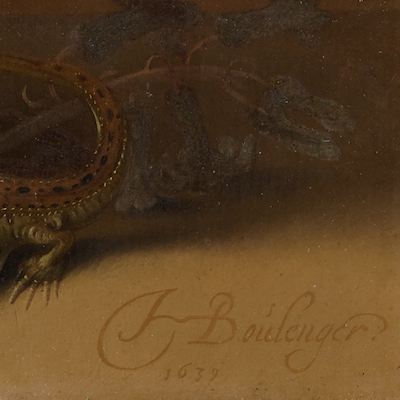 Hans Gillisz. Bollongier or Boulenger was born around 1600 in Haarlem. We know little about his early life. In 1623 he became a member of the Haarlem Guild of Saint Luke, a Dutch painter who specialized in flower still-life’s and belonged to the Dutch School.

He lived and worked in Haarlem all his life. He was one of the few flower- still life painters in that city. However, some genre pieces are also known of him. He had a very personal style, which is characterized by a strong light-dark contrast, also known as chiaroscuro.

He was a specialist in painting bouquets of flowers. He was credited with quite a few paintings that are not flower or fruit still life’s that are probably works of art by his brother Horatio. He painted during a period of great productivity for the Haarlem artists, this was in the decades after Karel van Mander's “Schilderboeck” published.

In this book he describes the rules that one should follow to make good paintings and drawings. However, Bollongier developed his own unique style while at the same time succeeding in respecting all those specific rules. And although his fellow Haarlem painters did not really appreciate his work.

Hans Bollongier's paintings were immensely popular with the public. As a genre, painting (flower) still lifes was considered inferior to historical allegories.

But later flower painters, such as the monographer Anthony Claesz II, were strongly influenced by Bollongier.Today, his work is considered part of the evidence that there was a tulip mania in the mid-17th century. Although some say this is only part of early marketing strategies to promote Haarlem and attract tourists. As early as the 17th century noblemen from Amsterdam visited, Leiden and the rest of the Netherlands in the spring the tulip fields of Haarlem and paintings of tulips were just as popular at the time as the tulip bulbs themselves.

Hans Bollongier, Still life with flowers, 1639, oil on panel, 67.6 x 53.3 cm. Rijksmuseum collection.This exuberant bouquet looks natural, but tulips, anemones, roses, and carnations do not bloom simultaneously in nature. Bollongier, however, composed a balanced composition with it.The still life was painted shortly after the stock market crash in 1637, when many went bankrupt due to the speculation in tulip bulbs. So perhaps the festive bouquet refers to the transience of earthly things.