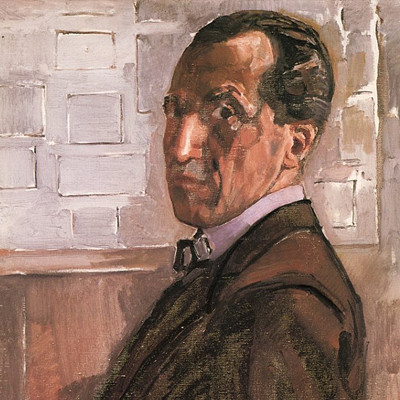 Pieter Cornelis "Piet" Mondriaan was a Dutch painter and theoretician who is regarded as one of the greatest artists of the 20th century.[2][3] He is known for being one of the pioneers of 20th century abstract art, as he changed his artistic direction from figurative painting to an increasingly abstract style, until he reached a point where his artistic vocabulary was reduced to simple geometric elements.

Mondrian's art was highly utopian and was concerned with a search for universal values and aesthetics. He proclaimed in 1914: Art is higher than reality and has no direct relation to reality. To approach the spiritual in art, one will make as little use as possible of reality, because reality is opposed to the spiritual. We find ourselves in the presence of an abstract art. Art should be above reality, otherwise it would have no value for man. His art, however, always remained rooted in nature.

Mondrian's work had an enormous influence on 20th century art, influencing not only the course of abstract painting and numerous major styles and art movements (e.g. Color Field painting, Abstract Expressionism and Minimalism), but also fields outside the domain of painting, such as design, architecture and fashion. Design historian Stephen Bayley said: 'Mondrian has come to mean Modernism. His name and his work sum up the High Modernist ideal. I don’t like the word ‘iconic’, so let’s say that he’s become totemic – a totem for everything Modernism set out to be.

When the 47-year-old Piet Mondrian left the Netherlands for unfettered Paris for the second and last time in 1919, he set about at once to make his studio a nurturing environment for paintings he had in mind that would increasingly express the principles of neoplasticism about which he had been writing for two years. To hide the studio's structural flaws quickly and inexpensively, he tacked up large rectangular placards, each in a single color or neutral hue. Smaller colored paper squares and rectangles, composed together, accented the walls. Then came an intense period of painting. Again he addressed the walls, repositioning the colored cutouts, adding to their number, altering the dynamics of color and space, producing new tensions and equilibrium. Before long, he had established a creative schedule in which a period of painting took turns with a period of experimentally regrouping the smaller papers on the walls, a process that directly fed the next period of painting. It was a pattern he followed for the rest of his life, through wartime moves from Paris to London’s Hampstead in 1938 and 1940, across the Atlantic to Manhattan.

At the age of 71 in the fall of 1943, Mondrian moved into his second and final Manhattan studio at 15 East 59th Street, and set about to recreate the environment he had learned over the years was most congenial to his modest way of life and most stimulating to his art. He painted the high walls the same off-white he used on his easel and on the seats, tables and storage cases he designed and fashioned meticulously from discarded orange and apple-crates. He glossed the top of a white metal stool in the same brilliant primary red he applied to the cardboard sheath he made for the radio-phonograph that spilled forth his beloved jazz from well-traveled records. Visitors to this last studio seldom saw more than one or two new canvases, but found, often to their astonishment, that eight large compositions of colored bits of paper he had tacked and re-tacked to the walls in ever-changing relationships constituted together an environment that, paradoxically and simultaneously, was both kinetic and serene, stimulating and restful. It was the best space, Mondriaan said, that he had inhabited. He was there for only a few months, as he died in February 1944.