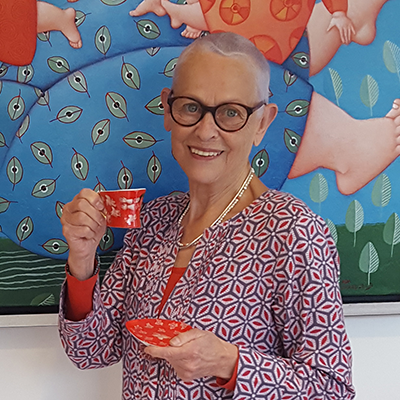 Ada Breedveld was born in Dordrecht at the start of the Dutch "hunger winter" in 1944. Her parents fled with Ada and her brothers, away from the ruined city of Rotterdam. Life was difficult and hard, just as for any post-war child. Fortunately, Ada found a lot of enjoyment in drawing and painting. From nursery school age onwards, she grabbed every opportunity to experiment with colours and lines. Not a single piece of paper was safe from Ada's creativity.

After her education she started working, but none of her jobs gave her the enjoyment and satisfaction that she was drawing or painting. She spent all her free time on drawing and studying in order to improve her skills.Ada experimented with colours, materials, and different themes. Inspired by an article in a magazine in which the meaning of the word surrealism was explained she started focussing on "the so-called free world". The occasionally rather cramped realism was replaced by imaginative, colourful and most of all joyful combinations.

Together with other artists, who have a penchant for surrealism, she travelled to Spain, Germany, and France in order to visit the main museums in Berlin, Paris, London, New York, Madrid and Barcelona. This also gave her the opportunity to speak with artists and to visit new galleries.

An explosion of drawings and colourful paintings followed. She got inspired by her numerous foreign trips and meetings with writers, poets and graphic artists. Ada was inspired and formed by artists such as: Marcel Duchamp, Paul Klee, Salvador Dali, Felecien Robs and Henri Rousseau.

Her best known works, in which Ada pictures her opulent and vivacious women, originate from the comic series Sjaantje. Ada created this comic series for her mother, who had suffered from corpulence during her lifetime. Ada wanted to let her mother come to life again in her work, emphasising the pleasant and jolly aspects. Her paintings are as it were a joyful renaissance of her mother.

All this has been a source of inspiration for Ada Breedveld for more than 25 years. The joyful pictures of ladies are now popular with a broad audience and not only in the Netherlands. Ada has held exhibitions abroad, where she has numerous admirers. Ada's works are sold in Germany, America, England, Switzerland and Japan.