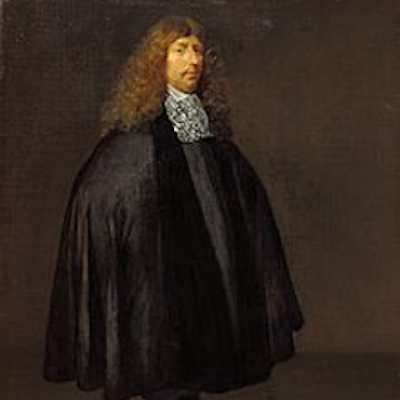 Gerard ter Borch was born in December 1617 in Zwolle in the province of Overijssel.He was an influential and pioneering Dutch genre painter who lived during the Golden Age.He influenced fellow painters Gabriel Metsu, Gerrit Dou, Eglon van der Neer and Johannes Vermeer.

According to Arthur K. Wheelock Jr. Ter Borch has "set up a new framework for the subject, taking people to the sanctuary of the house," showing the insecurities of the figures and expertly hinting at their inner life. However, his influence as a painter was later surpassed by Vermeer.

He received excellent training from his father Gerard ter Borch the Elder, also an artist, and developed his talent from an early age. The inscription on a study of a head proves that Ter Borch was in Amsterdam in 1632, where he possibly studied with Willem Cornelisz Duyster or Pieter Codde.

Duyster's influence can be found in a photo with the year 1638, in the lonides Bequest (Victoria and Albert Museum). In 1634 he studied with Pieter de Molijn in Haarlem.

In 1635 he was in London and then traveled through Germany, France, Spain and Italy. His sister Gesina also became a painter. It is certain that he was in Rome in 1641, where he painted the small copper portraits of Jan Six. His sister Gesina modeled for his painting Seated young woman (ca. 1650).

At one point Ter Borch was invited to visit Madrid, where he got work and the honorary title of Philip IV, but due to an intrigue he would have to return to the Netherlands. He seems to have lived in Haarlem for some time; but eventually he settled in Deventer, where he became a city councelor.

Ter Borch was known for his depiction of texture in draperies. Ter Borch's works are relatively rare; about eighty have been cataloged.

We witness an intimate ritual between a mother and her child. Gerard ter Borch made a name for himself with this kind of silent performances with one or a few figures who are completely absorbed in their activities. The woman who modeled for the mother is Ter Borch's stepmother, and the kid is probably one of his half-brothers. It may seem like a careless family snapshot, but in the seventeenth century lice hunting also symbolized a good mother who takes good care of her children.

With the lice comb she not only pays attention to a clean appearance of the child, but also to a pure mind and interior.


Some of our museum quality reproductions of Gerard ter Borch are listed below:

Hunting for Lice on canvas 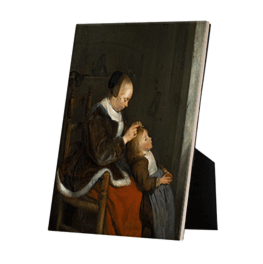 Hunting for Lice on ceramic tile with the easelback 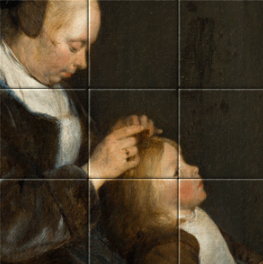 Hunting for Lice on tiletableau 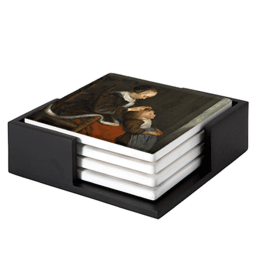 Hunting for Lice on ceramic coasters